There are a lot of reasons to be concerned with your own personal privacy and security these days, especially when it comes to mobile devices and electronics. Most of us now keep hundreds of megabytes of sensitive data on our smartphones – which happen to be carried everywhere with us. Because these devices remain connected to the internet, it can cause more than a few security and privacy concerns. Of course, then you have other channels like Facebook, Twitter, Google and more – that collect lots of personal data and are used across several different platforms, in addition to mobile.

All of these different platforms collecting information can lead to some very serious complications and problems when it comes to privacy. Unfortunately, it’s not getting any cleaner – especially now that we’re just adding more portable devices to the mix.

Take smartwatches, for example which will now be worn by many and used in much the same way as a smartphone. It doesn’t matter whether they pair with a smartphone directly or act as a standalone device, they will – at some point in time – be used to store or come in contact with sensitive personal information.

Is smartwatch security a problem we should all be concerned about? How can we be sure our smartwatches won’t become a major target in terms of privacy and security breaches? While there is no surefire way to lock down sensitive personal data completely, there are some steps you can take to protect yourself. We’re going to explore some of the ways smartwatches are commonly used, to better identify ways you can protect your personal information stored on your own watch.

Unless you have a habit of taking off your smartwatch in public and leaving it places, you’re not going to leave your smartwatch behind anywhere. Adversely, this is something that happens quite a bit with smartphones.

For instance, let’s say someone leaves their phone at a cafe or bar by accident, and an uncrupulous character comes along and finds it. In turn, all of your personal data and information stored on the device is compromised including credit card info, your address, personal contacts, social account access and more. Naturally, that’s why they outfit mobile devices with security locking protocols, but you’d be surprised how many people don’t take advantage of it.

Right out of the gate, it looks like smartwatches are a little more secure just because you’re meant to wear them on your person at all times. What about if you do accidentally leave your watch somewhere? What if you have a few drinks and forget it at a friends house, or even at a public place?

Like smartphones, most smartwatches also include basic security measures. Take advantage of this feature – you should take advantage of it on your smartphone too. Use a pattern lock or something similar if you don’t want to remember passcodes. Never leave your device unsecured, especially when it’s a go-to device that includes tons of personal information.

It seems a little silly pointing this out, but it’s something that one may not consider when first looking at using a smartwatch. One of the most common features of any smartwatch is that it pairs with a phone to deliver notifications and alerts to your wrist. This means texts, emails and other sensitive messages could be showing up on your smartwatch display at any point during your day. Unfortunately, this also means if you’re in public or near someone you don’t want reading your incoming messages – you may have to screen your device carefully.

Say, for example, you’re in a meeting and your boss is pacing around the room. Your co-worker sends an incriminating text to you and it happens to pop up on your smartwatch display the moment your boss is looking over your shoulder. This is a pretty cut and dry case of bad luck, but it can happen to anyone.

Since you’ll be peeking at your wrist throughout your day to check important messages you’ll want to remain aware of your current whereabouts and who’s around you at all times. One could argue the same thing is possible with a smartphone, and while that’s true – it’s definitely easier to move a phone out of view than something attached to your wrist.

Bluetooth isn’t one of the most secure connection protocols used at the moment, and it just so happens that’s what most smartwatches take advantage of to pair with a smartphone. While there is a common belief that it’s “secure enough,” it’s still possible for someone malicious – and resourceful – to gain access and do some pretty questionable stuff. Then again, there isn’t really a solid reason why anyone would want to hack into a smartwatch – at least not yet. Unless they just wanted to have some fun and mess with you.

It’s still something to keep in mind, and be wary of for the future. As smartwatches advance in terms of hardware and functionality it may become more important to monitor when you have a Bluetooth connection active. 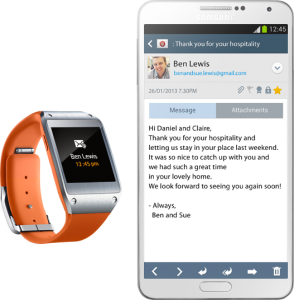 Interestingly enough, smartwatches also run third party apps from your smartphone – that is, they are actually installed on your phone and through Bluetooth pairing they transmit the necessary data and information. Some watches will allow you to install native apps directly on the device, but this is the exception currently more than it is the rule.

Some of these third party apps require you to input or share personal information such as your access username and password in order to get the app working. Pebble 2.0 apps, for instance are notorious for doing this. While it’s unlikely that most of these developers are collecting personal information for their own gain in some way, it’s not entirely out of the question. This is always more of a problem with the software ecosystem than it is the actual device, but still. You should always be wary of any request for personal data – including account info – and be sure to track what the offenders are doing if you decide to trust them. In the case of a smartwatch app, you’ll want to keep a close eye on your device and smartwatch to be sure sensitive information isn’t being pulled. Then again, that requires a bit more knowledge about the devices in question so the average consumer may have trouble when it comes to monitoring this stuff.

Smartwatch Security: Is It Safe?

The bottom line is that realistically, any connected devices – such as a smartphone or smartwatch – are going to have security and privacy risks. If you’re careful about what kind of information you’re storing on them you should be okay.

Should you be concerned with smartwatch security? Yes, you should always be concerned about your own privacy and security. However, smartwatches are rarely used to store sensitive data at this point in time especially since they’re meant to work as a second screen of sorts for smartphones. That said, they can still access a phone and pull sensitive data from it like messages, browsing history and more. Also, pay attention where you leave your watch when you’re not wearing it and always use security measures to protect yourself across devices. Sure it may be a hassle to enter a passcode every time you want to look at a message, but it’s better than the alternative – someone gaining access and stealing personal info.