The Value Of the Apple Watch Depends On the Wearer

Tech reviewers all over the world got their hands on an Apple Watch this week, and I wish I could tell you there was some sort of collective thumbs-up or thumbs-down. Unfortunately, there isn’t.

In fact it was rare to find a review that was either all negative or all positive. Those who didn’t really feel that the device was worth the money still tended to find some aspects they really liked, while others who ended up falling in love with the Apple Watch easily pointed out things that should have been done better.

Obviously it’s a matter of personal choice, but there’s more to it than that. This is a brand new device in what — for most people — is a brand new category of devices. It’s not just a matter of liking it or not liking it, it is more about discovering if this new device fits into your lifestyle and provides things that you need and want.

When you boil it all down, that’s not an easy decision to make.

Most Apple Watch Reviews Are Ambiguous

The truth is, it takes some time to figure those things out. If there was one thing most reviewers agreed on, it was that the Apple Watch takes some getting used to. You can’t just slap it onto your wrist and immediately love it or hate it. There are a lot of things to learn about how to use it, and about how to customize it in a way that suits you best. It’s kind of like establishing a new relationship.

One of the most comprehensive reviews came from Joshua Topolsky of Bloomberg News. His review encapsulates the ambiguity most reviewers felt for the Apple Watch.

In it he says:

The watch is not life-changing. It is, however, excellent. Apple will sell millions of these devices, and many people will love and obsess over them. It is a wonderful component of a big ecosystem that the company has carefully built over many years. It is more seamless and simple than any of its counterparts in the marketplace. It is, without question, the best smartwatch in the world.

Topolsky loved the styling, calling it “beautiful in a surgical way”. He loved the “Complications“, the widgets that surround the clock face, calling them “one of the most useful parts of the watch, offering the kind of information that really does elevate the device beyond a simple timepiece.”

Even after all of that praise, he elaborates further:

So Apple has succeeded in its first big task with its watch. It made something that lives up to the company’s reputation as an innovator and raised the bar for a whole new class of devices. Its second task—making me feel that I need this thing on my wrist every day—well, I’m not quite sure it’s there yet. It’s still another screen, another distraction, another way to disconnect, as much as it is the opposite. The Apple Watch is cool, it’s beautiful, it’s powerful, and it’s easy to use. But it’s not essential. Not yet.

Topolsky’s argument is valid. No one truly needs an Apple Watch in their life, at least not yet.

Topolsky was also disappointed in the physical effort it took to activate the screen from sleep mode, saying he sometimes had to make a big arm swing just to get the screen to light up, and even then not consistently.

Apple Watch Takes a Lot of Time to Get Used To 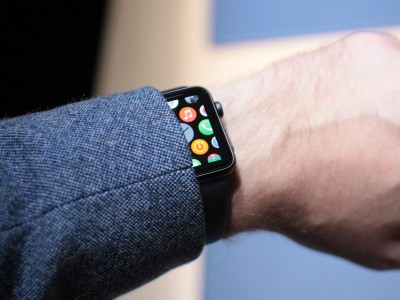 Farhad Manjoo of the New York Times said it took him “three long, often confusing and frustrating” days to get comfortable with the Apple Watch, but that once he finally got the hang of it, he fell in love with the device. But he wondered how many people would have the patience and wherewithal to begin enjoying the device as much as he did:

Indeed, to a degree unusual for a new Apple device, the Watch is not suited for tech novices. It is designed for people who are inundated with notifications coming in through their phones, and for those who care to think about, and want to try to manage, the way the digital world intrudes on their lives.

He raved about the “taptic engine” notifications which deliver different vibrations on your wrist, representing different incoming information. By knowing whether it was either an incoming phonecall, or text message, or calendar appointment, he could glean information without having to actually look at anything, or, if he had to look, he only had to look for seconds instead of minutes.

The Apple Watch Is Not for Everyone

In the Wall Street Journal, Joanna Stern argued that while the Apple Watch provided “good looks and coolness”, it provided “too many features that are too hard to find”. She liked the fitness functions, marvelling at the accuracy of the heartbeat monitor, but was frustrated that the exercise data resided in then iPhone and not the watch. And she was critical of the difficulty she had choosing apps, making her wish her fingers “were the size of toothpicks”. In the end, her conclusion was that it might be a better idea to wait for the next generation Apple Watch.

What about you? Are you techie enough to take it on? Does style trump substance for you? Or, are you just waiting to try it on and see how it goes?