Unless you’re an expert on Smartwatches – or vocabulary – it’s likely that you’ll come across a term used on this site that you don’t understand. To help out, we’ve compiled a list of terms and definitions that pertain to Smartwatches, gadgets or technology in general. If you encounter a word on the site that you don’t know, feel free to come back here to find out what it means.

ATM – Abbreviation for “atmospheres,” which is a unit of measurement used to describe how water resistant a watch or smartwatch is. The number standard for ATM is in meters, so for example 3 ATM would be 30 meters, or 20 ATM would be 200 meters.

Apps – A software bundle or package designed to run on a mobile device such as a smartwatch or smartphone. Apps can come from both official (proprietary) and third party sources. They enhance the functionality and usability of a device by offering the user new features, functions and even expanded compatibility in some circumstances.

Band (Wristband) – The wristband or wrapping of a watch/smartwatch that secures the device to your person. With most smartwatches the band can be swapped out for a custom one, provided the new band is an appropriate size.

Bluetooth – A wireless connectivity feature similar to Wi-Fi that allows the transfer of data back and forth between several platforms. Most smartwatches must be connected to a Bluetooth compatible smartphone in order to operate at their full potential.

Build – When it comes to technology and devices like a smartwatch or smartphone, the term build refers to the general durability of the device. It encompasses the quality of the materials used in manufacturing and how well they hold up against normal wear and tear.

Case – The external body or chassis of a device.

Compatibility – The perceived rate at which a device works directly with another gadget or piece of software. As an example, the Samsung Galaxy Gear is only compatible with a select few Samsung branded devices running the Android OS. Adversely the Gear is not compatible with iOS devices.

Concept – An initial design or prototype of a device that isn’t always indicative of the final product. A concept design is a mock-up of a finished product, and is more of a realized idea.

Customization – Refers to the process or depth at which users can personalize a device, UI or software package. Most devices allow the user to install custom apps, watchfaces or themes which offers them a more personal experience.

Design – When it comes to technology and devices like a smartwatch or smartphone, the term design refers to the general style of the device. It can include components such as a wristband, external case, chassis, body finish, and much more. Think of the design as an all-inclusive package pertaining to the aesthetics of a device.

Digital – Modern style devoid of traditional functions and features. In the smartwatch world, the term digital watch refers to a watchface or clock style that includes only digital information and numbers. In other words no components like an hour or minute hand. The time is generally displayed on the screen in one of many different visual styles. Digital devices often display other information as well, like notifications and message alerts. It should be noted that a digital can emulate an analog clock.

E Ink Display – A brand of display that includes black and white elements. There are many different types of black and white displays for a bevy of devices, however “E-Ink” refers to a very specific model and brand. Outside of the smartwatch world, the original Amazon Kindle, Barnes and Noble Nook and several other e-reader devices used E-Ink displays.

E Paper Display – A type of display very similar to an “E-Ink” display which includes black and white elements. Sometimes an E-Paper display will include touchscreen support, however there are times where they do not.

External Storage – Refers to external media which allows a device to take advantage of extra storage support. The term usually refers to micro-SD cards and similar media, as well as a device’s support for such media – otherwise known as the connection port.

Functionality – Refers to a set of features or tasks which a device can activate. For example, some smartwatches include notification functionality – which means they pair with a smartphone and receive alerts – while others do not.

Internal Storage – Refers to the integrated storage space on a device, which does not require additional media to take advantage of. It should be noted that very few smartwatches include internal storage, and the ones that do have very little space. This is because most smartwatches piggyback from a connected smartphone, where the apps and content are stored and streamed through Bluetooth (wireless).

Microfiber Cloth – A type of material or fabric used to clean modern electronic devices like smartphones, smartwatches and more. They are commonly used to clean touchscreen displays, removing fingerprints and greasy smudges that come from normal use. The soft microfiber material means the display or device in question is less likely to receive a scratch during cleaning. It should be noted that using a microfiber cloth does not prevent scratches that can occur from rubbing dirt, rocks and other environmental debris on the glass or plastic screen.

Notifications – Alerts that indicate a new message, email or data has been received. The most common type of notification is a message alert which tells the user they have received a text message or email. Notifications can come in the form of visual aids – like an icon – sounds or even vibrations. 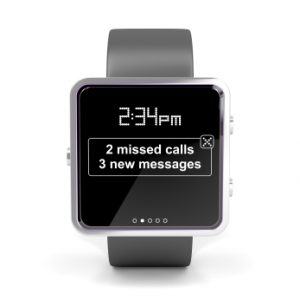 OS (Operating System) – The main software running on a device – not to be confused with the UI (User Interface). The UI refers to the mechanics of a particular software package, while the OS is the actual software.

Personalization – The process at which users can customize or create a more personal experience for themselves. The rate of personalization – also known as customization – has to do with the many various elements that a user can change about a device. For reference those changes can come in the form of a new visual style, sound notification, mobile app and much more.

Smartwatch – A watchlike device that can do a whole lot more than just tell time. Modern smartwatches are an extension of smartphones and can receive notifications, receive or make calls and much more. Not every smartwatch is created equal, so they all have a specific set of features and limitations depending on the model.

Techies – A general term used to describe “geeks” or technology enthusiasts. Most techies possess a considerable amount of knowledge about technology and gadgets in general, but some just enjoy innovation and the field. In other words, you don’t have to be an expert on technology to be considered a techie.

Touch Controls – Similar to a touchscreen in that they support touch and gesture based input, however touch controls are merely just a toggle instead of an entire display. Touch based controls are often used to scroll, pan, zoom or sometimes to navigate through a UI.

Touchscreen – A popular component of modern “smart” devices. The touchscreen is a type of display that allows for touch or gesture based input from a user.

Turn-by-turn Navigation – Otherwise referred to as GPS by many, turn-by-turn navigation uses a GPS signal to deliver real-time travel directions.

UI (User Interface) – The main interface of a device, which generally includes basic functions, and navigation. Poor navigation features on a device are often associated with the UI, when in fact they have more to do with the system software.

Version – A particular edition or release of software. Operating systems like Android or iOS generally have multiple versions available at any given time.

Watchface – The main watch display which shows the time or active alerts. With smartwatches, users can generally change the visual theme of the watchface from several pre-configured styles or even by creating one of their own design. With traditional analog watches, the watchface is often permanent. With a smartwatch, the watchface is generally software and UI based so it can be changed easily.

Wearable Tech – Refers to any piece of technology that is designed to be worn on your person. The wearable tech market has been expanding considerably over recent years and now includes wearable cameras, smartwatches and even augmented reality glasses like Google Glass.