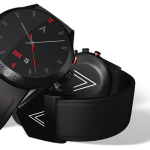 The Arrow smartwatch borrows a lot from the Moto 360, with exception to one very unique feature: the 360 degree (rotating) HD camera. It's attached to the bezel of the device which rotates, allowing users to capture images and video in a full 360 degrees. The Arrow also includes a round display, Android Wear and the same internal hardware as the Moto 360 including sapphire glass to protect the display. There's no word on price or a release date yet.