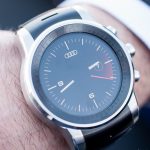 The LG G Watch R Pro Audi is nearly identical to the G Watch R, with exception to the Audi moniker and accents. It’s also running a custom version of webOS as opposed to Android Wear. It first appeared during CES 2015, as an audi official demoed a self-driving car and used the watch to interact with it.