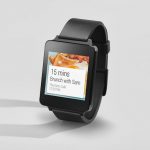 The LG G Watch was on of three initial Android Wear watches unveiled to the public. It launched alongside the Samsung Gear Live, with the Moto 360 - the third watch - launching later. The LG G Watch features a 1.65" LCD IPS display. It does not include any physical buttons, users must instead rely on the touchscreen. Aside from the water resistant body (up to 3 ATM), it doesn't offer anything special when compared to other Android Wear devices.