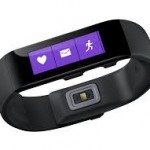 Previously rumored the Microsoft Surface smartwatch, the Microsoft Band is a fitness oriented device in the same vein as the FitBit or Jawbone Up. It includes a heart-rate monitor, a UV sensor, skin temperature sensor, Galvanic skin sensor, and dozens more sensors. It also features voice activation support through Microsoft's Cortana voice assistant, which operates similar to Apple's Siri or Google's Now platform. Unfortunately, it doesn't include much storage (only 64MB) and the dual batteries (100mAh x 2) only last for about 48 hours on a full charge. That said, the Microsoft Band is compatible with Windows Phone devices, and it's much cheaper than a lot of other offerings out there currently.