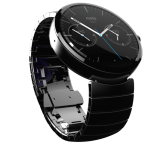 The Moto 360 is one of the first smartwatches powered by the new Android Wear OS, designed specifically for wearable devices. It was also one of the first smartwatches to offer a round watchface similar to traditional wrist watches - with many manufacturers now following suit. The Moto 360 was originally unveiled alongside the LG G Watch and Samsung Gear Live but did not launch until later. It features a 1.56" round LCD IPS display backed by a TI OMAP 3 processor and 512MB of RAM. In addition, it includes an integrated pedometer, heart-rate monitor and dual microphones for enhanced voice recognition support.