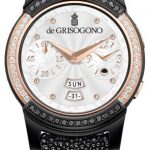 The Samsung De Grisogono Gear S2 is a smartwatch designed through a collaboration between Samsung and De Grisogono – a Swiss luxury jeweler. It has a 1.2-inch circular AMOLED display, and both white and black diamonds around the bezel. Sensors include an accelerometer, gyroscope, heart-rate monitor, and barometer. It can sync with Android and iOS phones via Bluetooth 4.1 LE. But the De Grisogono Gear S2 also has Wi-Fi and can connect to a network directly on its own. The allure - especially because it's so pricey - is that it's a fine piece of jewelry.