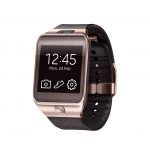 The Gear 2 is the successor to Samsung’s original Galaxy Gear smartwatch. Instead of using Android as the OS, Samsung opted to use their own Tizen with the Gear 2, Gear 2 Neo and Gear Fit models. This means that apps previously developed for the Gear will not work with the Gear 2. The Gear 2 includes a better design, a new optical heart rate monitor and all the same smartwatch-like functionality as its predecessor. In terms of usability and design the Gear 2 is better than the original model. Unfortunately, even the new Gear models including the Gear 2 are only compatible with a handful of Samsung branded handsets.