Top 5 Reasons You Should Wait to Buy a SmartWatch

Check out Top 5 Reasons You Should Buy A Smartwatch Now – for an opposing view!

The smartwatch is the latest item to make an introduction in the marketplace. Although  it’s not a new concept, today’s technologically advanced models can do more than ever  before. With that being said, is that a good or bad thing? Should you join the smart watch revolution or hold off and buy one in the future? 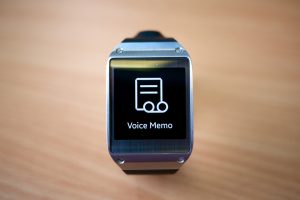 Smartwatches are basically an extension of the smart phones we already own. They  run apps and provide us with the ability to send and receive phone calls. The biggest  selling point of a smartwatch is in its convenience. Rather than pull out our mobile  phones, we turn our wrists and access the information that is needed.  With all new technology, better models will be developed making older models less  efficient and obsolete. People wanting to be part of latest trend pay exorbitant prices for  items like smartwatches not out of necessity but more out of novelty. They want to b e the first among their circle of family and friends with whatever gadget is being offered.  Many don’t put a lot of thought or research into their purchase. That’s when it’s  beneficial to weigh the pros and cons of each smartwatch model being offered. The  more bells and whistles being offered, the more one has to ask, “Do I really need all  that?”

The future looks bright for the smartwatch in 2014. That poses a tough question.  “Should I or should I not buy one before the end of the year?” Despite looking great on  TV, the smartwatch is likely to go through several transformations before it becomes  something everyone owns. After all, didn’t smart phones eliminate many people’s need  for wearing a watch in the first place?

Here are five reasons to delay your purchase:

1) Hardware – This is one of the most important things to consider when it comes to smartwatches. One thing that should be noted is that with new ideas, new  hardware is needed. That can be said about any electronic gadget. The smart watch is no exception. With this new concept, the hardware is still not quite  there yet. It has improved since it came out just over a year ago, but the smart watches that are out right now are rudimentary to say the least. The problem is  no one really knows everything that should and shouldn’t be on the watch. This  is the biggest part of what companies are working on and they have a ways to  go.

2) Price – Be prepared to pay a fairly significant price for one of the first smart watches. They’re new so it’s going to cost more than any other typical watch.  With prices hovering around $200 or more, it’s something that many might look  at as a luxury not a necessity. The issue here is that while this is something new  and innovative, it’s something that most people don’t really understand. This  causes people not to be interested in purchasing smartwatches. Add in the  price and some might be inclined to just skip buying one altogether. After all,  they do have a smart phone and they can access what they need to from it.

3) Features – One of the biggest reasons to wait would be the lack of features or  apps. Current smartwatches have a limited number of apps available, just like  the smart phones did when they first debuted. Plus, syncing it to a phone can be  problematic as well as some watches are designed to be standalone units while  others are designed to work with smartphones. If this sounds confusing, don’t  worry. It is confusing. The features that smartwatches have right now are basic  and can be enticing, but this is something that is still in its infancy stage of design  and concept. So with this is mind, the better thing would be to wait and see what  comes out as they develop the ideas and features specifically designed for smartwatches.

4) Software – This ties in to the hardware and is another reason why it would better  to wait on smartwatches. The software is in beta and while companies are  working to improve it, they still are lacking in many areas. Most of the software  that is out there currently is designed for computers and smart phones,  not smartwatches. Some companies have pushed forward with bringing out  these watches, but they aren’t faring well. The reason is that they are using  the software that isn’t designed for smartwatches. Yes, they are working on  the software and adapting it to work for smartwatches, but it still isn’t where the  smartwatch can do enough to make them worth getting at this point.

5) Design and Style – While the concept is there, the design is lacking. The idea behind these smart watches was to get them to where they were stylish, sleek, and would function  with or without a smart phone synced up. While they have figured out some of  those, not all of them are that impressive. From blocky to bulky and more of a  weight on the wrist than something useful, smartwatches are a long way from  being everything everyone really wants. Companies are working to bring the  style and overall design into balance as they work on the rest, but there still is  room for improvement overall.

As with any technology or idea, one thing that some people worry about is if this  smartwatch idea is just a fad or something that will be revolutionary enough to make  it a long period of time. There would be no worse feeling of buying a $300 smart watch that doesn’t really do a whole lot of good, only to find out that Google Glass  is what everyone is getting. Companies such as Sony, Samsung, Apple, and even  Google are working on this concept to make it something very useful. They are  making changes to the software, the hardware, the overall design, and are looking at  2014 as the year to really make headway.

Just because we see something new and promising as consumers, doesn’t always  mean that we should go out and buy it right away. There is a time and place for  everything and right now smartwatches are on the rise. If the urge to buy a smart watch makes it hard to wait, then go for it. Just know that they are still in their  infancy or beta stages.

The companies that are producing this form of technology will definitely need  feedback from users on what works and doesn’t work as well as the different  types of features that are ideal. They can then take this information and use it to  continually improve the concept and design of the smartwatch.

Over time the technology will mature and most likely at a quick pace. But  for now, the best thing to do is wait and watch as 2014 is really shaping up to be a busy year for smartwatches. You’re likely to find a model that you like better than  the one that you’ve been looking at. There’s always some new feature that  will win you over, right?

Charissa Struble is a freelance writer, internet marketer, art lover, and avid traveler. Whenever she's not creating a new work of art, she's exploring the planet, taking pictures, and recording what she's found in her journal. You can read more about her adventures by visiting www.agirladogablog.com.