Home > Learn > The Struggles of Finding a Smartwatch as a Woman

The Struggles of Finding a Smartwatch as a Woman

And my wrists are smaller than most guys. In fact, many women have wrists and arms that are smaller than their male counterparts — and hands, too. (Duh, right?) That’s why when you are shopping at Nordstrom’s or Macy’s looking for a new watch, there are men and women options.

Aside from liking watches, I also like technology. I like cool new apps, the latest smartphones as well as the newest gadgets. So, naturally, I am highly interested in SmartWatches — which have been growing in popularity this last year.

Unfortunately, many of these SmartWatch companies are still only producing one size of their watch: a one size fits all option that is geared towards men.

Off the bat, I knew two things.

Fortunately, I had the sense to Google, “Best SmartWatches for women,” before diving in and buying a watch right away.

I had a hunch that there could be some size issues.

To my surprise, the options were much bleaker than I imagined. I found that there were no female-specific SmartWatches yet on the market. And in many reviews I read by women SmartWatch owners, there were complaints about the mammoth size of their new time piece.

Articles I Turned To

There were two articles specifically that guided me in my journey of finding the best SmartWatch:

The first article by Martin, who is a guy, painted a picture of the current SmartWatch industry. (Note: the article was written in January 2014, so it is a bit outdated.)

Then the latter piece was more like a review/analysis of the SmartWatches available for women. Lee discusses which SmartWatches work for women, and more commonly which do not. She also gets into the software behind the watch. Lee wrote her piece in July. So, still pre Apple Watch announcement — which happened in early September 2014.

Why Aren’t There Female Friendly SmartWatches?

According to Martin, no SmartWatch company has yet to make a gender distinction within their SmartWatch options. Searching today, about eleven months after the date his article was published, I also see no distinction.

An argument can be made that there is not a strong demand from women wanting SmartWatches. Women just aren’t as involved in the tech scene as men.

“The tech space is still heavily skewed towards men. That’s no secret. The brunt of our readership and viewership is men. Our team consists entirely of men. And, by comparison, the male demographic is more interested in technology.”

Perhaps the line of reasoning behind SmartWatch manufacturers is that because women are less interested in technology as a whole, they are less likely to want the latest gadget — in this case, a SmartWatch.

Nonetheless, Martin and I agree that just because men have a stronger presence in the tech space does not mean women are not looking to be SmartWatch users. Martin specifically notes women he has talked to that would love a SmartWatch, but are concerned with the large size and typically masculine appearance of the watch options available.

In fact, I believe that women are just as likely to invest in a SmartWatch as a man. (Of course, if there were decent-looking options at our disposal.)

To me, thinking otherwise is like believing that a man is more likely to use a SmartPhone or a tablet than a woman. Which is nonsense.

In fact, studies have shown that men prefer Androids while women prefer iPhones. Additionally, Pew found that “there are no statistically significant differences in tablet ownership between men and women.”

Of course, a distinction between SmartPhones and Tablets and then SmartWatches is that with SmartWatches, the look and style of the gadget are important. Wearing a SmartWatch is also a fashion choice — unlike using a SmartPhones or tablet.

In any case — whatever the reasons may be — at the moment there are still no female-specific options.

So what should I, and other girls who want a SmartWatch, do? 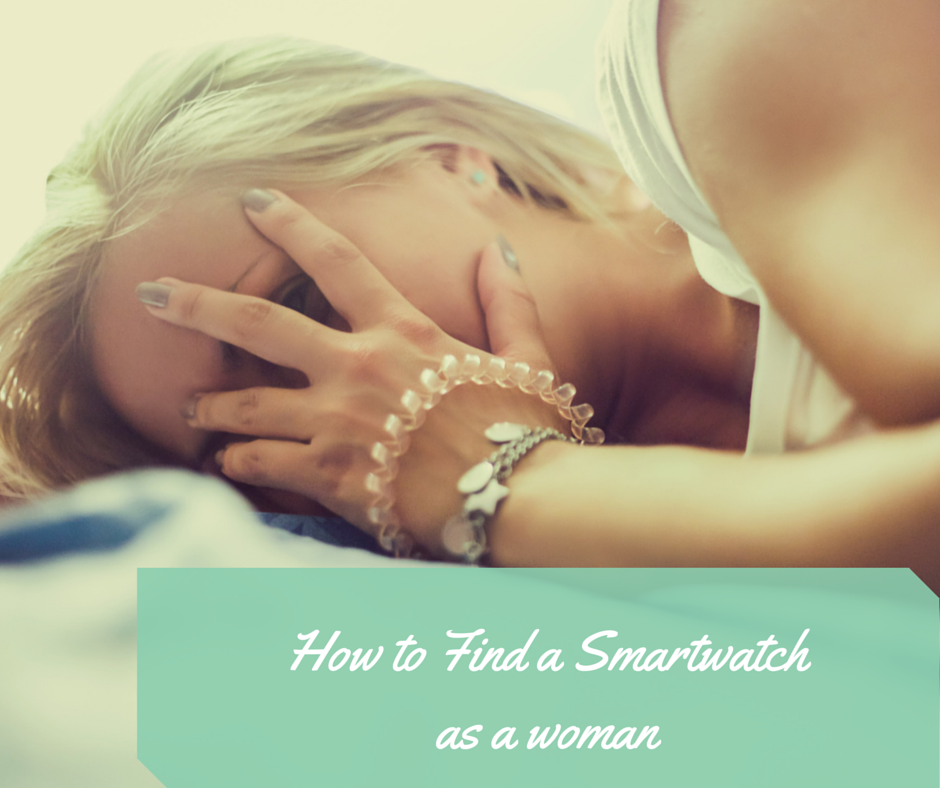 What Should Us Gals Do?

With no female-specific choices, let’s look at what’s currently available anyways. And more importantly, what can work for us.

This brings me to Lee’s helpful piece. Also, I am taking into consideration an article previously written on SmartWatches.org — “The Top Five Best Looking SmartWatches Available or Coming Soon”.

Popular SmartWatches and What Can Work For Women

Pebble Steel: While the Pebble Steel is undeniably sleeker than its’ other Pebble siblings, apparently it is a no-go for ladies. Specifically, in his article Martin talks about the Pebble Steel not being a good fit for women. He describes,

“Almost every female who has ever asked me about Pebble has always followed-up with another very important question: ‘Is there one with a smaller face?’ “

While the Pebble Steel smartwatch targets a higher-end demographic compared to other models, it does not include women. 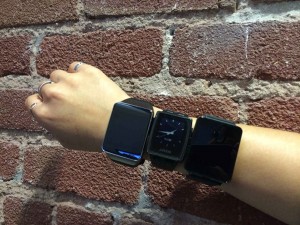 LG G Watch: The LG G was the first Android Wear device to hit the scene. While it has charming technology, it’s enormous in size. (As you can see in the photo to the left.)

Even the newer LG G Watch R is reportedly too big for tiny wrists.

However, unlike its predecessor, the LG Watch R has a circular face. (Which does give it a more elegant feel in my opinion.)

ASUS ZenWatch: This watch was not mentioned in Lee’s piece because it just came out in October. But it did make it onto SmartWatches.org’s latest list.

This ASUS Watch is Android Wear.

Unlike the LG Watch R, this watch has a square face. It is attractive looking from the photos. They even show women wearing the watch on the website — which is a good sign. (Unlike some websites that only show men wearing their watch!)

Overall, the online reviews are pretty good. This definitely seems like a viable option for women.

“It’s a genuinely good-looking smartwatch, which is a rarity in the current market. While it too boasts a big screen, the Moto 360—like the Martian analog-digital smartwatch mash-up before it—offers a rounded aesthetic that bucks the boxy dictum. This is sexy hardware design that might work as a high-tech boyfriend watch, at least. “ 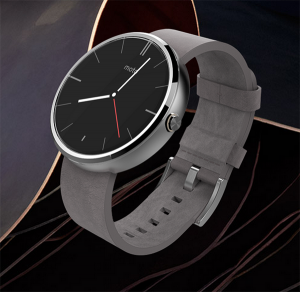 The Moto 360 has now been on the market for a few months. The biggest downside I’ve been seeing in reviews is a poor battery life, that is if you leave it on full notifications all day long.

I realize that I am predominantly covering what looks good on a woman. Nothing about the software behind the scenes is being mentioned — so do you research before buying!

Looking Into the Future

As the SmartWatch market continues to blossom, I undoubtedly believe the options for women will open up.

Already Apple seems to be heading in the right direction. The highly anticipated Apple Watch will come in two size selections. As their website reads,

“Everyone’s style is different, as is everyone’s wrist. So Apple Watch comes in two case sizes: 38mm and 42mm. Both of which can be set up to work on either your left or your right wrist.” 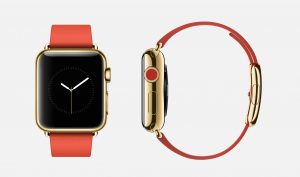 As always, Apple puts lots of forethought into their product. Of course, this watch won’t be out until “Early 2015” — whatever that means. But there’s hope.

Nonetheless, Apple’s watches are not gender differentiated. It’s merely a size difference: just like the iPhone 6 and 6 plus. However, they offer a variety of bands and designs that can cater to both men and women.

Lee’s remarks on the Moto 360 had me sold. Plus, I wanted a watch with a circular face rather than square — I feel like it’s more traditional.

Here are other reasons why I chose the Moto 360:

As I am writing this, I am waiting for the watch to arrive in the mail. We’ll have to see if the Moto 360 meets my expectations.

Either way, there needs to be a change in the SmartWatch industry. SmartWatches combine fashion and technology: it would be insane to leave women out of the equation. (Click here to Tweet this!)

In the few short months since I wrote this piece, the smartwatch scene for women has changed…at least according to some.

What about the Apple Watch?

I spoke about the Apple Watch in the original piece.

But now, that it’s so close to release date, what do people think about the Apple Watch…for women?

This article, posted on Guru Focus, thinks the Apple Watch is a sound solution for women wanting instant wrist notifications.

The author points specifically to Angela Adherents, former Burberry CEO who is now Senior Vice President of Retail and Online Sales, as the lady behind the scenes to thank.

On the other hand, recent article on The Cheat Sheet by Jess Bolluyt, has a few bones to pick with the Apple Watch as a solution for women.

Notably, she points to the Apple Watch still being too big and masculine for female consumers. She also mentions the watch not offering enough functionality for the female buyer. And one mistake many wearable manufacturers make when trying to appeal for women: making the device “pretty”…but not functional.

However, in my opinion, it does appear to be making a step in the right direction.

What about other smartwatch options for ladies, beyond Apple Watch?

Since the time of initial publish, other options have came to the scene for women. Here’s a quick look at two options that look promising for women: the Omate and Kenneth Coles’s new smartwatch line.

Omate claims to have designed “the world’s smartwatch designed exclusively for women”. The “Lutetia”.

While the specifications are impressive (with five days of standby battery time, and iOS and Android compatible) as well as the appearance (clearly a feminine watch)…it isn’t available yet for purchase. Or at least you can’t buy it on their site .

This source says it will be launching in late April 2015. While information is relatively limited, it seems as if there will be men and women models available.

Moreover, this watch will be compatible with Android or iPhone smartphones. Also — you can apparently take selfies with the wearable.

My thoughts on this collaboration? The fact women are in the promo video is promising.

But, as with the Apple Watch and Lutetia — time will tell.

Laurence Bradford loves technology and writing about it. An avid exerciser, she is interested in the combination of gadgets and fitness optimization. Find her online at learntocodewith.me.